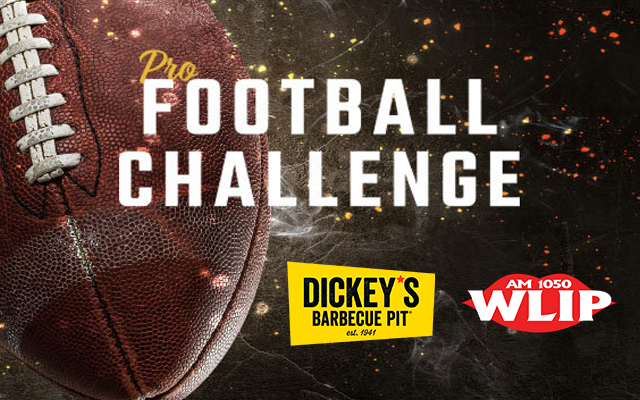 NO PURCHASE NECESSARY. A PURCHASE WILL NOT IMPROVE YOUR CHANCES OF WINNING. Contest is subject to all applicable federal, state and local laws. This Game May Not Be Used To Conduct, Advertise Or Promote Any Form Of Gambling.

Promotional Period: The Game Period begins at kickoff of the first 2020 regular season pro football game scheduled to take place on Thursday, September 10th, 2020  and ends at the completion of the season on Sunday, January 3rd, 2020. Exact dates and times are subject to change.

Eligibility: The Promotion is open to all legal residents of the U.S. , 18 years of age or older, 19 years of age or older in AL, DE, and NE, and 21 years of age or older in MS, except employees of Aptivada, Participating Stations and other Sponsors (collectively, the “Promotion Entities”), other television or radio stations located in the same market as a Participating Station, and their respective parents, subsidiaries, affiliates, advertising or promotion partn8ers (if any), and members of their immediate families or persons living in the same household.  This Promotion is subject to all applicable federal, state, and local laws and regulations.  Void outside the United States, and where prohibited.  Entrants who do not meet the eligibility requirements will be disqualified and unable to win.

Entry Method: To enter, fill in the entry form by selecting the outcome of each game. Each correct pick will be worth 1 point. The player that earns the most points each week will be the weekly winner. The player that earns the most points during the season will be the season winner.  Any incorrect entries will receive 0 points. The maximum point total for correctly determining the winning team in every game played during the designated season is 272. The maximum point total for each week is 16. In case of a tie refer to the tiebreaker rules below.

Tiebreaker #4 – A random draw between all remaining players.

Tiebreaker #1 – The player that correctly predicted the winning pick of the Tiebreaker Game is considered the winner.

Tiebreaker #2 – A Player’s predicted Tiebreaker Game score is compared to the actual Tiebreaker Game. The differences between the predicted scores and actual scores for each team are added. The entry with the smallest total difference is considered the winning entry.

Tiebreaker #3 – A random draw between all remaining Entrants to determine the winner. In all cases, an entry that does not win a tiebreaker is eliminated from consideration.

All games will use a rolling lock system which will allow players to make picks up to approximately 15 minutes prior to official kick-off time of each game.  Any selections submitted after the deadlines are considered invalid, and no points will be awarded. All times displayed on the schedule are Eastern. You may change your pick for any game up until the time that game is locked. Entries must be completed on time. Once a game is locked, you may not change your pick for it. If you did not make a pick for a particular game, it is counted as a loss. If you submit a partial entry and either forget or are unable to complete it, the games you did not pick will count as losses.

In conjunction with this national Promotion, a Participating Station or Sponsor may be conducting its own contest or sweepstakes for a chance to win a local prize.  For more information and official rules, visit the website of the Participating Station or Sponsor.  Aptivada is not responsible for the conduct or administration of any such local contest/sweepstakes, including without limitation procuring and awarding a local prize.

Promotion Entities are not responsible for technical outages, delays, or malfunctions of any kind, including those related to the Internet, cell phone service, or computer failures.  Accordingly, Promotion Entities are not responsible for errors or data loss of any kind, lost or unavailable Internet connections, failed, incomplete, garbled or deleted computer or network transmissions, inability to access any website or online service, any other error or malfunction, late, lost, illegible or misdirected entries, or for printing errors in any advertisement, entry form or rules.

Any attempt by an entrant or any person to deliberately damage any website or social networking site used in the Promotion or to undermine the legitimate operation of this Promotion may be a violation of criminal and civil laws.  Should such an attempt be made,  Aptivada reserves the right to seek full prosecution and/or damages from any such individual to the fullest extent permitted by law.  Aptivada’s failure to enforce any term of these Official Rules shall not constitute a waiver of that provision.

In the event a participant gets every pick correct for the entire season they will be awarded the grand prize of $50,000.

Odds of winning depend on the number of eligible entries received.

In conjunction with this national Promotion, weekly winners could win $30 worth of meat from Dickey’s BBQ Pit in Kenosha.   Aptivada is not responsible for the conduct or administration of any such local contest/sweepstakes, including without limitation procuring and awarding a local prize.

Prizes cannot be transferred or substituted except in Aptivada’s or Participating Station’s sole discretion. Aptivada reserves the right to substitute the prize with a prize of comparable or greater value (as determined by Aptivada in its sole discretion).  The prize is expressly limited to the item listed above.

In the event that the 2020 NFL season is canceled prior to its completion the $50,000 grand prize will be null and void

Winner will be selected from among all eligible entries based on the picks made following the day on which the Season ends.

Prior to awarding a prize, Aptivada in its sole discretion may require verification of winner’s identification by a showing of valid government-issued photo ID.

Decisions of Aptivada with respect to winner selection and the awarding of prizes are final and binding when made.

Information you provide in connection with the Contest is subject to Sponsor’s Privacy Policy and may be shared with Sponsors.

Payments of all federal, state and local taxes are solely the responsibility of the winner.  Winner must execute and return any required IRS form (including IRS form 1099), affidavit of eligibility, liability and publicity release (where permitted by law), or similar document within ten (10) days of notification or winner may be disqualified in Aptivada’s sole discretion and the prize will be forfeited.

Any entrant who provides a mobile wireless number in connection with the Promotion, including by providing a mobile number for winner notification purposes, is responsible for informing the Promotion Entities if his or her number is reassigned to another person at any time before the end of the Promotion and for providing an alternative number where he or she may be reached.

Participating in the Promotion and accepting a prize constitutes winner’s permission for Aptivada or its agents to photograph, film, and record winner, and to use his/her name, address (city and state), likeness, photograph, voice, biographical information and/or any statements made by him/her regarding the Promotion or its sponsors for  purposes of trade, publicity or promotion without additional financial or other compensation, and, Aptivada may, where legal, require a winner to sign a publicity release confirming such consent prior to acceptance of the prize.

To the fullest extent permitted by law, by participating in the Promotion and/or accepting a prize, you understand and agree:

to release and hold harmless Promotion Entities, and each of their respective parent, subsidiary and affiliated entities, advertising and promotion agencies, any social media platform utilized in the conduct of the Promotion (including but not limited to Facebook), and the officers, shareholders, directors, employees, agents, representatives, successors, and assigns of each (collectively, the “Released Parties”) against any and all claims or liability arising directly or indirectly from the Prize or the Promotion.   You further understand and agree that all rights under Section 1542 of the Civil Code of California (“Section 1542”) and any similar law of any state or territory of the United States that may be applicable with respect to the foregoing release are hereby expressly and forever waived. You acknowledge that Section 1542 provides that: “A GENERAL RELEASE DOES NOT EXTEND TO CLAIMS WHICH THE CREDITOR DOES NOT KNOW OR SUSPECT TO EXIST IN HIS OR HER FAVOR AT THE TIME OF EXECUTING THE RELEASE, WHICH, IF KNOWN BY HIM OR HER MUST HAVE MATERIALLY AFFECTED HIS OR HER SETTLEMENT WITH THE DEBTOR.” The releases hereunder are intended to apply to all claims not known or suspected to exist with the intent of waiving the effect of laws requiring the intent to release future unknown claims.

that the Federal Arbitration Act applies to this agreement, and if the parties are unable to resolve their dispute amicably, it shall be resolved by means of binding arbitration (not in a court of law);

that any and all disputes, claims, and causes of action arising out of or in connection with this Promotion, or any prizes awarded, shall be resolved individually, without resort to any form of class action (even if the rules and procedures of the arbitration tribunal allow class arbitrations);

that any and all claims, judgments, and awards shall be limited to actual out-of-pocket costs incurred, including costs associated with entering this Promotion, but in no event and under no circumstances will entrants or winners be permitted to obtain awards for attorneys’ fees, and you hereby waive all rights to claim punitive, incidental, or consequential damages, or any other form of damages, other than actual out-of-pocket expenses, and any and all rights to have damages multiplied or otherwise increased;

if for any reason a claim or dispute regarding the Promotion or these Official Rules proceeds in court rather than through arbitration, there will not be a jury trial.

The Sponsors and this Web site, are in no way connected with, affiliated with or endorsed by the NFL, or any of its affiliated teams, players, or players union. All references to any football name or term is purely nominative and not intended to imply any connection, affiliation, or endorsement.

To obtain a copy of these Official Rules or a winner list following completion of the Promotion, send a self-addressed, stamped envelope (VT residents may omit return postage) specifying “Official Rules” or “Winner List” to:

Kenosha's Radio Station
CONNECT WITH US LISTEN TO US ON