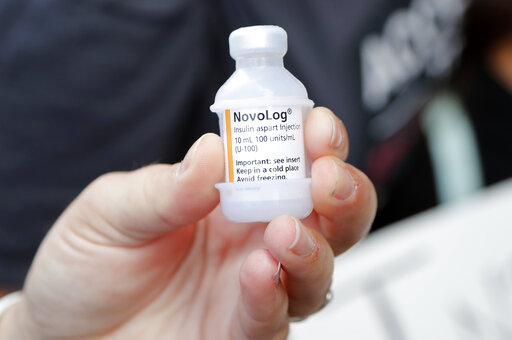 FILE - A patient holds a vial of insulin during a news conference outside the Olde Walkersville Pharmacy, July 28, 2019, in Windsor, Canada. Legislation to limit insulin costs for people with diabetes is getting a new push in the Senate. Democrats say they want to move quickly, but they'll need Republican support to get anything through an evenly divided chamber. (AP Photo/Carlos Osorio, File)

WASHINGTON (AP) — The House has passed a bill capping the monthly cost of insulin at $35 for insured patients.

Thursday’s vote is part of an election-year push by Democrats for price curbs on prescription drugs at a time of rising inflation.

Some could save hundreds of dollars annually.

President Joe Biden’s stalled social legislation would do much more, authorizing Medicare to negotiate prices for insulin and other drugs, penalizing pharmaceuticals that raise prices faster than inflation, and limiting costs for Medicare enrollees.