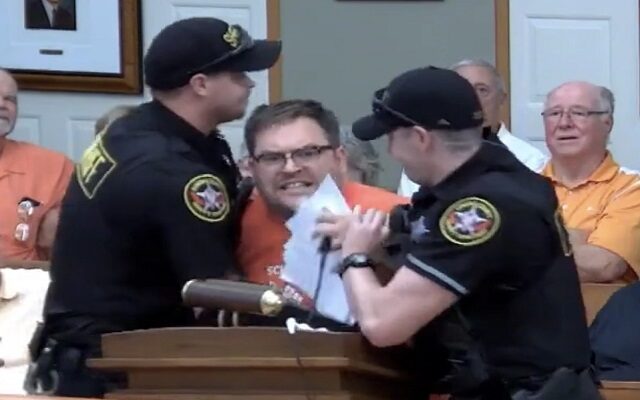 KENOSHA, WI (WLIP)–The Kenosha County Board meeting ended abruptly last night without a vote on any of the controversial issues on their agenda.

During public comments, a resident was arrested by Kenosha County Sheriff’s Deputies following a verbal confrontation between 43-year-old Joel Trudell and County Board Chairman Gabe Nudo over the proposed expansion of conceal and carry rights in county buildings.

Nudo took exception to an off-hand remark Trudell made on the issue.

Trudell was removed from the podium and then struggled with deputies as many in the crowd reacted, wanting Nudo to allow him to continue.

However, that’s when the chaos really started.

As the commotion continued the board quickly voted to adjourn the meeting on a narrow 12-11 vote.

It’s not clear when votes to allow expanded conceal carry of firearms in some county buildings will occur.