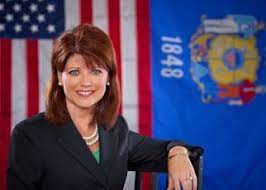 Republican Rebecca Kleefisch, who spent eight years as lieutenant governor under Scott Walker, has launched her campaign for governor.

Kleefisch contrasts herself with Democratic Gov. Tony Evers in her campaign launch video, casting him as weak and her as ready to back police and fight special interests.

The 46-year-old Kleefisch becomes the best-known Republican to officially get into the race against Evers.

The race is a top priority for Republicans who control the Wisconsin Legislature but have been blocked by Evers.

If there’s a Republican governor, Democrats would not have the votes to stop the GOP agenda heading into the 2024 presidential election in the battleground state.