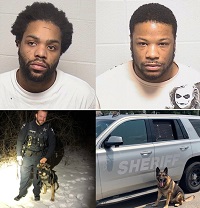 (Beach Park, IL)  Two arrests have been announced after an armed robbery in Beach Park. Lake County Sheriff’s officials say they were called to a business on Sunday in the 37-thousand block of North Green Bay Road. The business owner said a man came in, and took cash from the register at gunpoint before fleeing on foot. Canine Duke tracked to a vehicle that was stuck in a snowbank…and 29-year-old Darrell Brown of Waukegan was arrested as a possible getaway driver in a vehicle that was reported stolen. 30-year-old Terrell Davis of Waukegan was tracked by Canine Danno, and eventually taken into custody. He faces a multitude of charges including armed robbery and being a fugitive from justice due to outstanding warrants in Minnesota. Both Brown and Davis are due for bond hearings today (Tuesday).