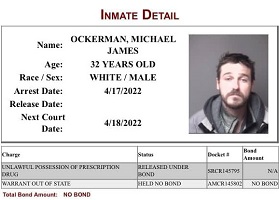 (Dubuque, IA)  A man accused of striking a Lake County police officer with his vehicle, is in custody in another state. Police in Dubuque, Iowa say Michael Ockerman was taken into custody on Sunday on a count of unlawful possession of a prescription drug. Ockerman was also wanted on a warrant after reportedly striking a female Lincolnshire Police officer with his vehicle as he drove recklessly last Thursday evening.  The officer was hospitalized for minor injuries…and Ockerman was able to escape after police called off a pursuit. The 32-year-old is being held without bond in an Iowa jail, and will face one count of aggravated battery to a peace officer when he is extradited to Lake County.