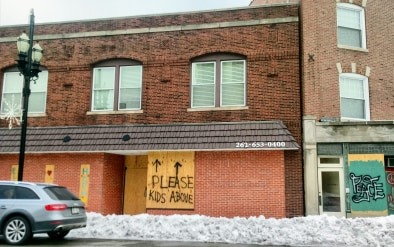 A building is boarded up after the August 2020 Kenosha Riots.

16 months after the shooting of Jacob Blake by a Kenosha Police officer that led to the protests turned riots, the Kenosha News reports that the D-A’s office is about halfway through with anticipated prosecutions.

The new website will remain active for a few months and will have pictures and other evidence to try and identify additional suspects. Some of the evidence was previously released but prosecutors hope that a fresh look will garner new information.

A total of 94 cases have been prosecuted so far-including out-of-state defendants.

But the vast majority live in Kenosha or Racine and were charged with either burglary, destruction of property, or disorderly conduct.