Scanner reports indicated that it happened around 2 AM in the 6500 block of 18th Avenue.

As the call for the shooting came in, officers also became involved in a high speed chase with a suspect vehicle.

The vehicle was reportedly located on West Lawn Avenue near 21st Street in Racine but no one was inside.

A gun and shell casings were reportedly discovered inside.

Kenosha Police say a juvenile was shot in the hand and suspects eluded police after the chase.

They ask anyone with any info to contact the Kenosha Police Department. 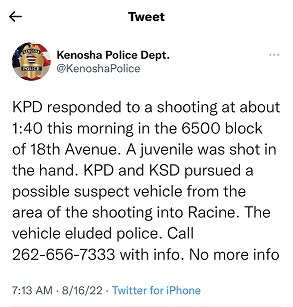