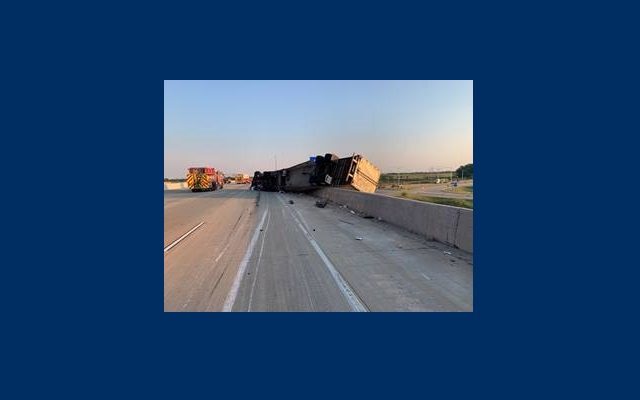 KENOSHA, WI (WLIP)—Update 9:30 AM–We have more information on the crash that closed down I-94 in Kenosha County Wednesday night.

The crash happened around 7 PM when a sedan reportedly driven by an Iowa man struck a semi as the two vehicles were traveling in the southbound lanes between Highways 50 and C. The semi driver told authorities that he saw the car veer towards him so he swerved in an attempt to avoid a collision.

The impact of the crash caused the semi trailer to twist over a retaining wall and flip on its side, dumping its contents on the highway and down an embankment. The sedan’s driver, 56 year old Avery Norman of Waterloo was arrested and is charged with OWI causing injury.

Four people-three in the car and the semi driver-were taken to the hospital with unspecified injuries. The interstate was shut down for several hours for the investigation and clean-up.

5 AM (6/18/2020)A semi rolled over on I-94 Wednesday evening. The accident was reported just after 7 PM, on the southbound lanes of the interstate.

Initial scanner reports indicated multiple injuries and Flight For Life was notified but later canceled. The crash left the trailer of the truck twisted and bent over a guardrail with its contents scattered down the embankment. Three other vehicles may have been involved.

The interstate had to be shut down near Highways 50 and C for investigation and cleanup. It reopened early Thursday morning.

We’ll have more details as they become available.