Why Is St. Patrick’s Day All About Green? 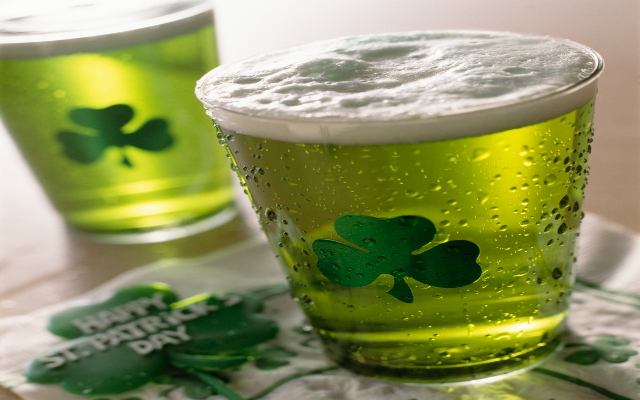 St. Patrick’s Day is a holiday traditionally known for parades, shamrocks and all things Irish. From leprechauns to green cupcakes, green beer and green milkshakes. Green and St Patrick’s day may mean party time in America, but in Ireland, emerald-colored food dates back to a desperate past. In the 1800’s people were so deprived of food that they resorted to eating grass which would turn their mouth green. The color green is closely linked with Ireland, known as the Emerald Isle because of its green countryside. In the 19th century, Irish nationalists adopted the color to differentiate themselves from the reds and blues that were then associated with England, Scotland and Wales. Americans have long embraced St. Patrick’s Day traditions but many of them are not Irish at all. For instance, corned beef as delicious as it, is not Irish. That dish came from England.

WLIP spoke with Mike from Mason’s Pub & Eatery regarding their festivities tomorrow. According to Mike, Mason’s will serve over 300 pounds of corned beef and pour over 5 kegs of green beer! Mason’s will be offering their full menu along with a few additional Irish themed items like the Ultimate Reuben which is a deep fried Reuben. You’ll also be able to sample Mason’s Irish Stew & soda bread, Shepherd’s Pie, corned beer with cabbage and for dessert, Bailey’s Irish Cheesecake. Plus a performance by a bagpiper at 6:30pm!

Here are a few more Irish themed restaurants in this area, if you’re looking for a spot to celebrate with a bit of Irish food, beer and festivities.

Ashling on the Lough

#kenoshacounty
Connect With Us Listen To Us On