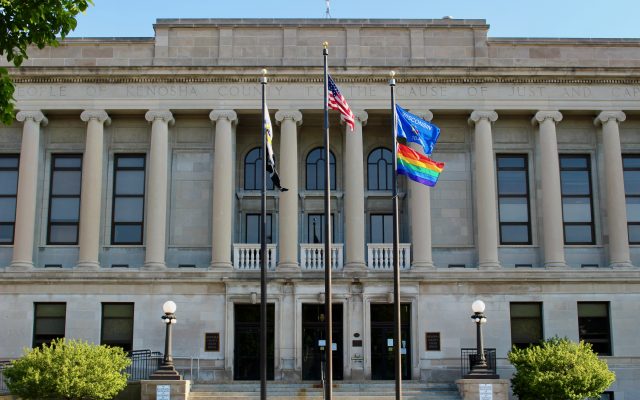 KENOSHA — County Executive Jim Kreuser today ordered that the Rainbow Pride flag will be displayed among the other flags in front of the Kenosha County Courthouse throughout the  month of June, LGBTQA+ Pride Month.

“Kenosha County recognizes and honors the diversity, heritage and contributions of our entire  population,” Kreuser said. “Pride Month is a time to celebrate our LGBTQ community and the  battles it has forged for equality and social acceptance. I am proud to fly the flag, a symbol of LGBTQ pride, above the steps of our Courthouse.”

The flag that was lifted this morning was donated to Kenosha County by the Kenosha Pride  organization.

Dan Seaver, president of Kenosha Pride, said the group is pleased with County Executive  Kreuser’s decision to fly the flag, as well as with the County Board’s passage last month of a resolution recognizing June as LGBTQA+ Pride Month.

“It’s a great thing to see it happening,” Seaver said. “I think it is important in that it adds that line  of visibility that this is a welcoming community.”

Kreuser’s order states that it will remain in effect for the month of June each year henceforth.  This year the Pride flag will also fly in front of the Courthouse during the weekend of Aug. 20-22, when Kenosha Pride will hold its annual celebration event in downtown Kenosha.

The Pride flag is flying in addition to the four flags that normally appear in front of the Courthouse; the United States, State of Wisconsin, Kenosha County and POW-MIA flags are  continuing to fly in their regular positions.