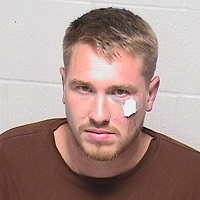 (Beach Park, IL)  A man is facing charges, after an apparent road rage incident, followed by a crash. Lake County Sheriff’s officials say Joseph Ebler displayed a firearm to another driver Friday night in Wadsworth, while the pair were at a stop light. He then followed the other driver who attempted to flee the situation, this time pointing the gun at the victim…before crashing his vehicle. The 28-year-old Beach Park man was located a short time later, a gun was located by Sheriff’s K9 Dax. Ebler now faces charges of aggravated unlawful use of a weapon, aggravated assault with a deadly weapon, aggravated DUI, and leaving the scene of an accident. Court records show he was able to post bond. He’s due for a hearing on September 13th.