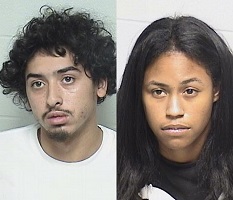 (Beach Park, IL)  Charges have been announced against two people involved in a shooting in Beach Park. The incident took place in late July in the parking lot of a business, killing one and injuring two. Lake County Sheriff’s officials say the two victims that survived…Jaziya Bankston of Waukegan and Dishelle Flores of North Chicago…were said to exchange fire with another subject during the incident. The 22 and 21-year-old’s now face charges including aggravated unlawful use of a weapon and delivery of cannabis. Bankston is being held on a 500-thousand-dollar bond with a court date on Friday…Flores has a 200-thousand-dollar bond and a Thursday court date. No further arrests have been announced.