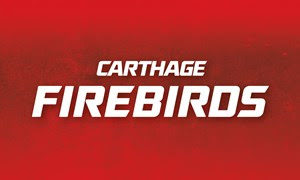 Acting on a recommendation from President John Swallow, the Board of Trustees voted at its Feb. 19 meeting to adopt the new team name. The decision concludes a collaborative five-month search for a unifying Carthage identity.

“We set out to find a team name that represents modern-day Carthage in an inclusive and dynamic way, and this search led us to a name that fits on so many levels,” says Jeff Hamar ’80, chairman of the board. “I know I speak for many Carthaginians in saying I’m proud to be a Firebird.”

Before issuing his recommendation, President Swallow discussed all three finalists with the College-wide task force that coordinated the team name search, as well as students (including student-athletes and Student Government representatives), coaches, and the Alumni Council. Firebirds was chosen over fellow finalists Lake Hawks and Fire.

In a survey taken last spring, more than 3,000 Carthaginians expressed – by a significant margin – their desire for a change. Many expressed concerns that the previous team names, Red Men and Lady Reds, impeded the College’s commitment to racial and gender equity.

The Board of Trustees voted in August 2020 to retire those names, effective immediately, and initiated the search for a suitable replacement. Students, parents, employees, alumni, and other supporters suggested nearly 500 team names, from which a pool of 16 semifinalists was announced in November.