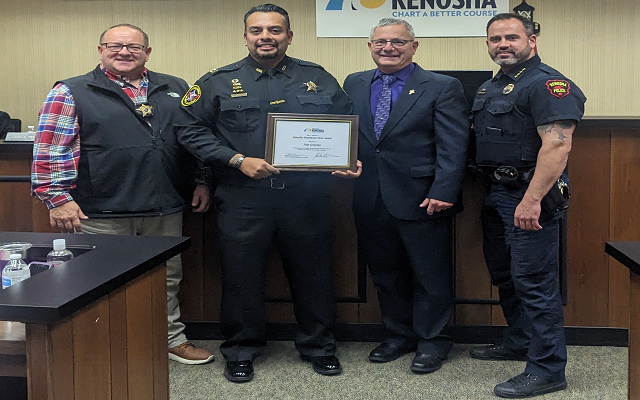 The Kenosha Hometown Heroes Commission created this program to identify and recognize as Hometown Heroes worthy men and women who have served or are currently serving in the United States Armed Forces who were born in, currently reside in, or have previously resided in ten (10) years or more at any time, in the City of Kenosha, for their outstanding personal achievements and the positive contributions they make to the Kenosha community.

Mr. Gonzalez is a member of VFW Post 1865; volunteers to work security at Christian Life School, and is an active member of Tabernacle Church. He has taken medical mission trips with Grace Church in Racine, providing interpretation and medical screenings, and is a licensed foster parent.

Mr. Gonzalez is a Captain with the Kenosha County Sheriff’s Department where he is one of 3 instructors providing training to members of law enforcement on the topic of Fair and Impartial Policing, promoting the awareness of explicit and implicit bias.

He is also an adjunct instructor at Gateway Technical College Law Enforcement Academy.

In 2013 he earned a Certificate of Appreciation for A Life Saving Effort.